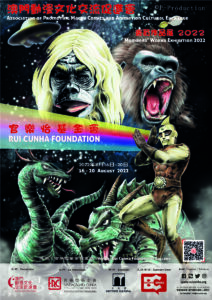 The Rui Cunha Foundation opens on Tuesday, August 16 at 6:30pm, the “Exhibition of Works by the Members of the Association of Promoting Macau Comics and Animation Cultural Exchange 2002″, a collective display without official ceremony to be visited over the course of only one week.

There are about 30 works created by 8 artists of comics, cartoons and animation. Six of the artists represented in this project are local and amateurs. They are joined by two professionals, one from Hong Kong and the other from Japan.

Vincent Ho has dedicated himself to comics for many years and is now concentrating on his first personal work, called “Cruel Angel”. Wing Mo is a budding illustrator who started by exploring different painting techniques and is now exploring the mixed media universe. Greymon Chan is the author of “Bony Guy”, a popular and widely publicized character on social media, whose by-products he is now promoting and developing. Z has been a manga designer since 2012 and is known for her most recent work, “Inhumans”, although she continues to explore new painting techniques and themes.

Nasu defines himself as «50% artist, 50% aubergine» and focus his art on illustrations and characters mostly in kawaii style, currently painting with watercolor and iPad. ST had great success in the children market of comic books with his first work, “The Caterpillar Family”, and his cartoons have been regularly published in Vakio daily newspaper. His most recent illustration project was “Super Awakening” and today, in addition to continuing to explore different styles, he is also a senior illustration teacher.

Leung Wai Ka is a professional cartoonist in Hong Kong and has been editor-in-chief of projects such as “Eternal Dragon Slayer”, “The Legend of Black Panther”, and many others. After becoming an independent creator, he co-edited “Extinction Game” with Beyen Dai, produced the storyboard and illustrations for the TV series “The Detective”, coordinated the “Black Comics” cartoons, illustrated the African chapter of “Extinction Game” and is now working on the new project “One Hundred Spirits, One Kind of Man”.

Hiroshi Kanatani is a renowned Japanese cartoonist whose works include “Shonen Sunday”, commissioned “Godzilla” illustrations for Toho Studios, contributions to “Famous Monsters of Filmland” and the “Monster Attack Team”, and a collaboration with Clint Eastwood and the Bruce Lee estate. His passion for monsters and heroes led him to develop projects in Hong Kong, Taiwan and America. Today he is a member of the Japan Manga Association and the year 2019 marked his second appearance at the San Diego Comic Fest.

The Association of Promoting Macau Comics and Animation Cultural Exchange was created in 2014 to support the professional development of the industry, technical exchanges and cooperation between local and foreign illustrators, with a view to warranting more high-quality and large-scale projects, as well as publications, lectures and other activities that benefit the Macao community.

The artworks will be displayed until August 20th, 2022.