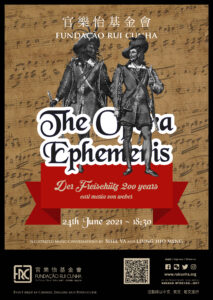 The Rui Cunha Foundation presents next Thursday, June 24th at 6:30 pm, the seventh session of the cycle of Conversations Illustrated with Music, under the title “The Opera Ephemeris: Der Freischütz – 200 Years”, marking two centuries over the fundamental work of the German composer Carl Maria von Weber, with a presentation by Shee Va and Leung Hio Meng.

On June 18, 1821, Carl Maria von Weber’s opera “Der Freischütz” (The Free Shooter) premiered in Berlin. As a crucial work in the musical panorama of Germanic romanticism, this session intends to remember it at the moment when its bicentennial is celebrated.

For this purpose, we invited the music teacher and pianist Leung Hio Meng for a conversation at the FRC Gallery, where music will illustrate various moments of the lyrical representation of this opera, which is rich in arias, duets and choirs.

The opera’s plot is based on Germanic folk tales that contrast with the usual stories of regal characters on classical mythology, so abundant in Italian and French operas. The work fascinates by the fantastic aspects of the supernatural, in vogue in the philosophical thought that opposed the French Enlightenment movement, and underlined the nationalist spirit. These same characteristics can also be found in the tales of the Grimm Brothers, in the naturalistic paintings of Caspar David Friedrich, and in the romantic confabulations of E. T. A. Hoffmann.

Regarding music, “Der Freischütz” follows the Germanic tradition of Singspiel by employing dialogue. It uses German folklore melodies in the choirs and, for the culminating scene at the Wolf’s Lair, which recounts the hunter’s encounter with the devil, Carl Maria von Weber innovated, opening the doors to a world of sounds, in the description of black magic and the invocation of demons. This contributed to the immediate success of the work that, combined with the mastery of the directors, came to enshrine the popularity of the opera that would reach our days. 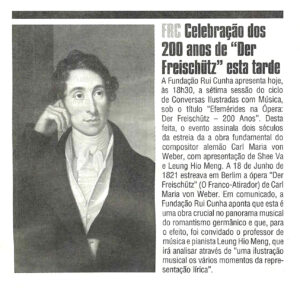 2021.10.21 - Game On - The Gaming Law and The Future of the Industry
YouTube Video VVVpT01QUmtKQldCVlVKMnl1d29jalF3LnFFMk9ycmhFMWh3