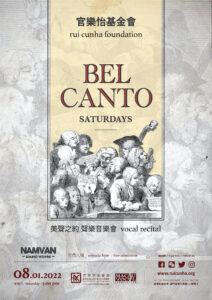 Lam Chi Wai is a member of the MVA, with an interesting background in the local lyrical music scene. He was second place for vocal solo at the 20th Macau Youth Music Competition; and at the 22nd Macau Youth Music Competition he was second place in the Western Song Group, while winning an honorary prize, and first place in the Chinese Song Group, accumulating also the Merit Award.

Priscilla Hao is 8 years old and she attends the Taipa Anglican High School. She has studied piano since the age of four and a half, and often participates in piano competitions or presentations, being at ease with stages and performing music in front of an audience.

The “Bel Canto Saturdays” has been held at the Rui Cunha Foundation since 2014. The aim was always to establish a platform to promote the encounter and vocal practice of lyrical music lovers, students and members of the Vocal Association of Macau, through these small monthly concert evenings. And, also, give the youngest the opportunity to acquire experience of live musical performances.

Bel Canto is considered the ultimate expression of the human voice. The Italian term was coined in the 18th century. This vocal technique emphasizes the beauty of sound and the artist’s technical ability, rather than the dramatic expression or romantic emotion. It is still taught today in similar ways as in the past.

Admission is free, but subject to capacity limitation, in accordance with health recommendations implemented by local authorities.